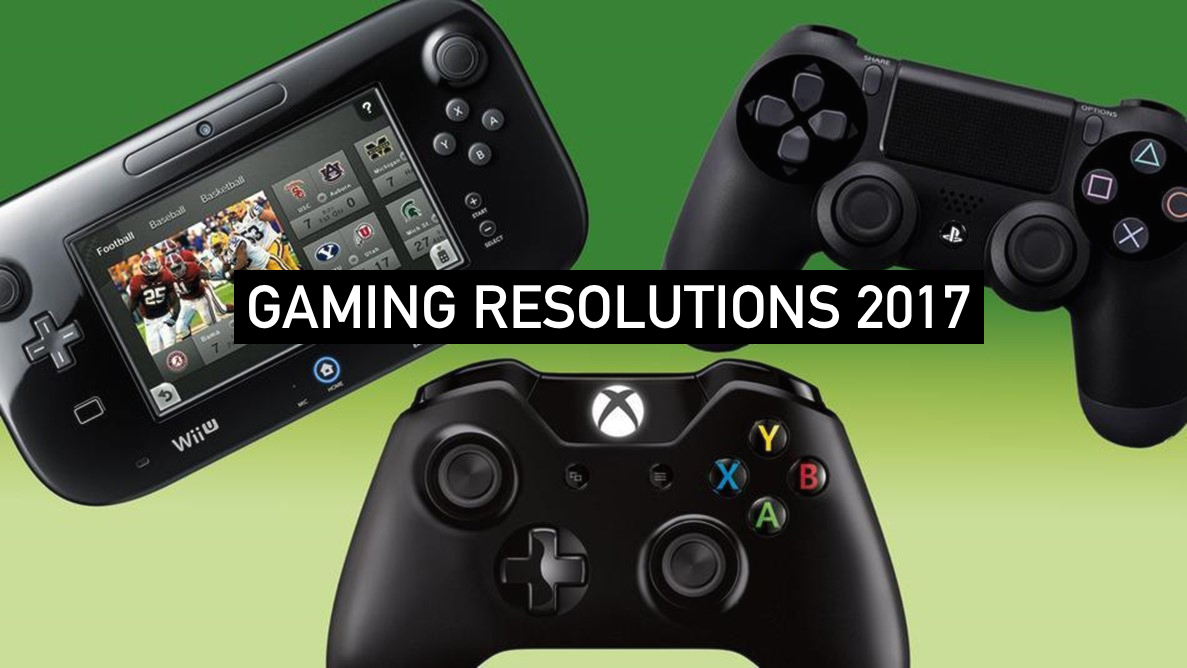 Trying to get this blog up and running has been a year-long struggle. There are a bunch of stupid reasons why which I am sure I will get into at some point in the future, but now at the start of a new year, I’m determined to kickstart the site into life. What is it going to become? Your guess is as good as mine at this point. Basically, I’m going to do whatever I feel like and see what I enjoy and don’t enjoy. Saying that the site can’t remain sitting empty while I try to think up something cool to post. So here is a list of my video game resolutions for 2017. Thrilling, I know.

Last year I found it tough to settle down and play games for an extended amount of time. This is partly due to the pace games are thrown at us now, gamers like myself can no longer keep up with every release, and that got me down. There were plenty of other reasons I found gaming tough this year, such as poor health, but I won’t bore you with the details here. This year I’m getting my arse back into gear and putting in some serious gaming time, that is resolution number one. I’ll be keeping a list of every game I play or go on to complete here on the site, so you’ll be able to keep up with how I’m getting on.

• Make better use of all my consoles •

I do not get the best out of my consoles. I love my 3DS, my Wii U and my Xbox One, but I fail at showing it. Too often do I stick on a console just because it is the one that is plugged in. This year I’m bringing my handhelds with me everywhere, for every game I play on one console I will try to match the same amount on my others. Basically, I just want to get the best experience with each and play plenty of their exclusives. Of course, we are getting a minimum of one new console this year, so we’ll see how that new dynamic adds to the pressure. One thing I do promise you my beautiful, beautiful consoles, none will be left by the wayside in 2017. Probably. Maybe.

I’ll be the first to admit that I pigeonhole myself by only playing genres that I know well. It would be great to get out of that rut, break the mould, and begin playing a much more diverse range of games. Specifically, I’d like to delve deep into the classic-JRPG and horror genres and explore what makes these games tick. The biggest problem with this plan is that I’m a huge coward, so if you ever see me shivering in a corner crying with a blanket wrapped around me, assume I played a horror game and make me a cup of tea. Thanks.

• Make a start at filling in gaps in my gaming knowledge •

As a kid, I played on SEGA consoles, after the sad demise of the Dreamcast I moved onto Nintendo 64 right up until Xbox 360 when I had a disposable income and started buying both Nintendo consoles and Microsoft’s efforts. So, I’ve missed some seminal titles. Mainly classic Nintendo games and the entire PlayStation catalogue. I want to start to fill in these gaps in my knowledge by playing games, reading books and watching videos. It’s exciting to learn more about your passions, and 2017 is the year I will double my knowledge!

So, I’ve already sort of touched on this in my introduction, but I really want to get this blog going. I have always had a creative outlet in my life up until the last few years, and that’s what I need this to be. Yeah, I’m no good at writing, or video editing or even talking while playing games, but I enjoy myself while doing it. I hope that will bleed through and will lead to someone else enjoying it too.

There we go. I wonder how long I’ll keep my resolutions this year? It’ll be hard, but I really am going to do my damnedest, because at the end of the day I’m doing all these things because I know they’ll make me happy. Do you have any resolutions for the new year? Do you even believe in making them? Let me know on Twitter @thebulbgames / @iamlightbulb or leave us a comment below.